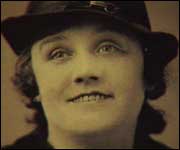 The Life of Clarice Cliff Part 1

In 1930, when Clarice Cliff became Art Director of Newport Pottery, she achieved the distinction of being the first woman to reach such a high echelon in the Potteries. She was, in effect, what we would nowadays call a ‘career woman’, but at the time when she was entrusted with the title Art Director by Colley Shorter, the factory’s Victorian owner, society was dominated by men who could never have envisaged Clarice’s rise to fame.

We can chronicle her phenomenal achievements, but it is still hard to appreciate them fully. Clarice Cliff emerged as a major force in ceramic design between the Great Strike of 1926 and the Depression that began in 1930. Her most successful years mirror those of the serious financial depression that affected the whole world. Clarice Cliff’s prolific output of shapes and patterns has never since been equalled. With little formal artistic training, but a unique understanding of how to use colour and form, she emerged as Art Director of the factory group that pioneered modern design in ceramics in the Thirties. Clarice took both the design and the marketing of pottery to new heights.

Nothing in her childhood hinted at the distinguished career that was to follow. Like the majority of people from this industrial part of Staffordshire, Clarice Cliff began life in a small two-up, two-down terraced house in Tunstall, with her parents and six brothers and sisters. The family was not poor but had a plain lifestyle.

Clarice seems to have been closer to her four sisters than to her two brothers. Her younger sister, Dorothy, was far more outgoing than Clarice. Known as Dolly, she loved dancing and shared a passion for dress-making with her sisters Hannah, Sarah and Ethel. All the Cliff girls were acknowledged by neighbours as being ‘smart’, but this related more to their ability to design their own frocks than to their income.

Clarice Cliff had a simple schooling, and spent much of each weekend with her sisters and friends at the services and Sunday School at Christchurch, in Tunstall. In the summer and at Easter they went on visits to the local countryside, where the children ran wild. A couple of times a year a dance in the church hall would cause great excitement, except for Clarice, who made it clear that she would far sooner be doing something constructive.

As was the case with virtually every working-class child at this time, Clarice had to leave school at thirteen and had little option but to work at a local potbank. Like all apprentices, she initially learned gilding and banding ware, but something fired her to look beyond working just to earn a living. She switched jobs twice and in 1916 arrived for her first day at A. J. Wilkinson’s works at Newport in Burslem. It meant a long journey to work by tram and then having to walk, but it was a key factor in improving herself.

A. J. Wilkinson’s was a successful potbank, which had been owned by the Shorter family since 1894. A sprawling dark mass of bottle-ovens, kilns and production shops, it ran alongside the Trent-Mersey canal, which served to deliver the raw ingredients for the earthenware and the coal to fire it. Nearly 400 workers were employed and every stage of production was manual. They negotiated steep wooden stairs or piles of coal while carrying on their shoulders long boards covered in ware. They certainly never dropped the boards – it would have cost them their job. In the distance they could see fields around the factory, but nearby these were scarred by a huge white shard ruck: broken pieces of ware spreading over many acres.

Wilkinson’s was run by Colley Shorter and his brother Guy. Colley was a wealthy, Victorian, upper-class man with a taste for fine furnishings and antiques that complemented his Arts and Crafts home. He would have had no idea who Clarice Cliff was when she joined. Indeed, it would have been unlikely that he would ever have had occasion to address her.