Pottery marks and porcelain marks are like silver hallmarks – often difficult to decipher, frequently duplicated with very small variations by other manufacturers, and changing with periods of manufacture and management of the pottery or porcelain factory.

Authentication therefore is seldom simply a question of identifying the maker and the period from a sign or symbol.

Founded by William Cookworthy c1770, later Cookworthy & Richard Champion. This was closed in 1781. 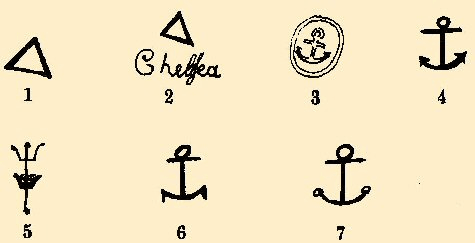 On Pocelains decorated at Chelsea after William Duesbury of Derby purchased the Chelsea factory c 1769 – 1784.

1. In gold, and infrequently, red.