Where Have All The Tobys Gone

Everybody claims to have at least one, but on further questioning, the one usually turns out to be a seaside holiday jug or at best, although quite collectible, a Royal DoultonCharacter Jug. Although there are a few Doultons capable of real­ising big sums, most Character Jugs can be bought for between 70 -200 GBP
The absence of the real Toby has become quite apparent, a viewpoint which I personally have held for a few years. An 1870 cross-legged Toby similar to this will usually cost around 150 GBP. If Longton 1850 is impressed on the base expect to pay up to 350. For this level of investment, say 150 – 200 GBP Great British Pounds), a nice late Victorian Toby can be purchased, and may probably still be intact with his detachable crown. 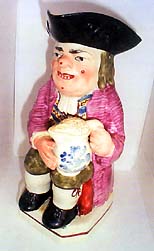 But let us go back to 1760 when the first Tobys emerged. A good Ralph Wood can be bought for 1,500 GBP. If it has the mould number on the base maybe it will fetch 1,800. If it is signed or has the Burslem mark you may well be looking at 2,500+. These jugs with their attractive running glazes are now very sought after. When did you last see one for sale? The enameled Toby from say 1800-1830 may well fetch up to 1,100 for a good specimen. I would say a good specimen without major repair or replacement hands etc, but maybe some minor cracking or small chips are quite acceptable in Toby Jugs of this age. They probably have had a hard life.

1830-1870 sees Jugs fetching around 400- 800 GBP depending on quality, a Walton Jug with a nice factory mark will fetch more as will a good Davenport with its anchor mark on and date. Any genuine mark which will help to identify pottery or potter will always enhance the price.

A very nice Faience Jug, probably about 1890, this will cost in the region of 700 – 800 GBP. French Faience jugs tend not to be so collectible, but a nice specimen, say 1890 – 1910 can fetch up to 800. One major difference with faience jugs is that they always carry considerable detail on the base regarding the artist and pottery, amongst other things, unlike 90% of Staffordshire and Yorkshire jugs which are generally unmarked. A nice impressed crown on a good Yorkshire may well add 200 – 300 pounds to its value.

The Jug wearing the green coat is The Thin Man. He pre-dates most Tobys being potted in 1770. A Thin Man can fetch up to 5000 GBP if unrestored and in fine shape. The Jug with the floral coat is a good example of a Prattware, 1830 and would cost around 700 for a good specimen.

I am totally convinced that the current interest in Toby Jugs will cause a spectacular rise in their value. Many are being exported, some get broken, there will never be enough to satisfy demand.

I confidently predict a rise in their value over the next few years by as much as 80%. They must be a good investment, but look after them, keep them behind glass and don’t keep washing them in hot detergents-beware.

A fine enameled-finished jug about 1840, with good floral decoration, with a puce colored coat, would cost about 500 – 600 GBP. He has a well-painted face and pockmarks, which are well defined. The other illustration shows an early snuff taker (a variation to the Ordinary Toby), and would fetch about 250 – 350 for this 1840 specimen.

I am certain that Toby Jugs and their variants, (Martha Gunn, The Gin Lady, The Snuff Taker, Heart Goodfellow, the Cross-Legged Jolly Miller), would be of historical interest to all those interested in the world of ceramics. When one considers the bottle-kiln firing which was available in 1790, for example, with no electric thermostats or modern technology, it is a wonder so many beautiful jugs were so well made and have existed to this very day.

One comment to Where Have All The Tobys Gone